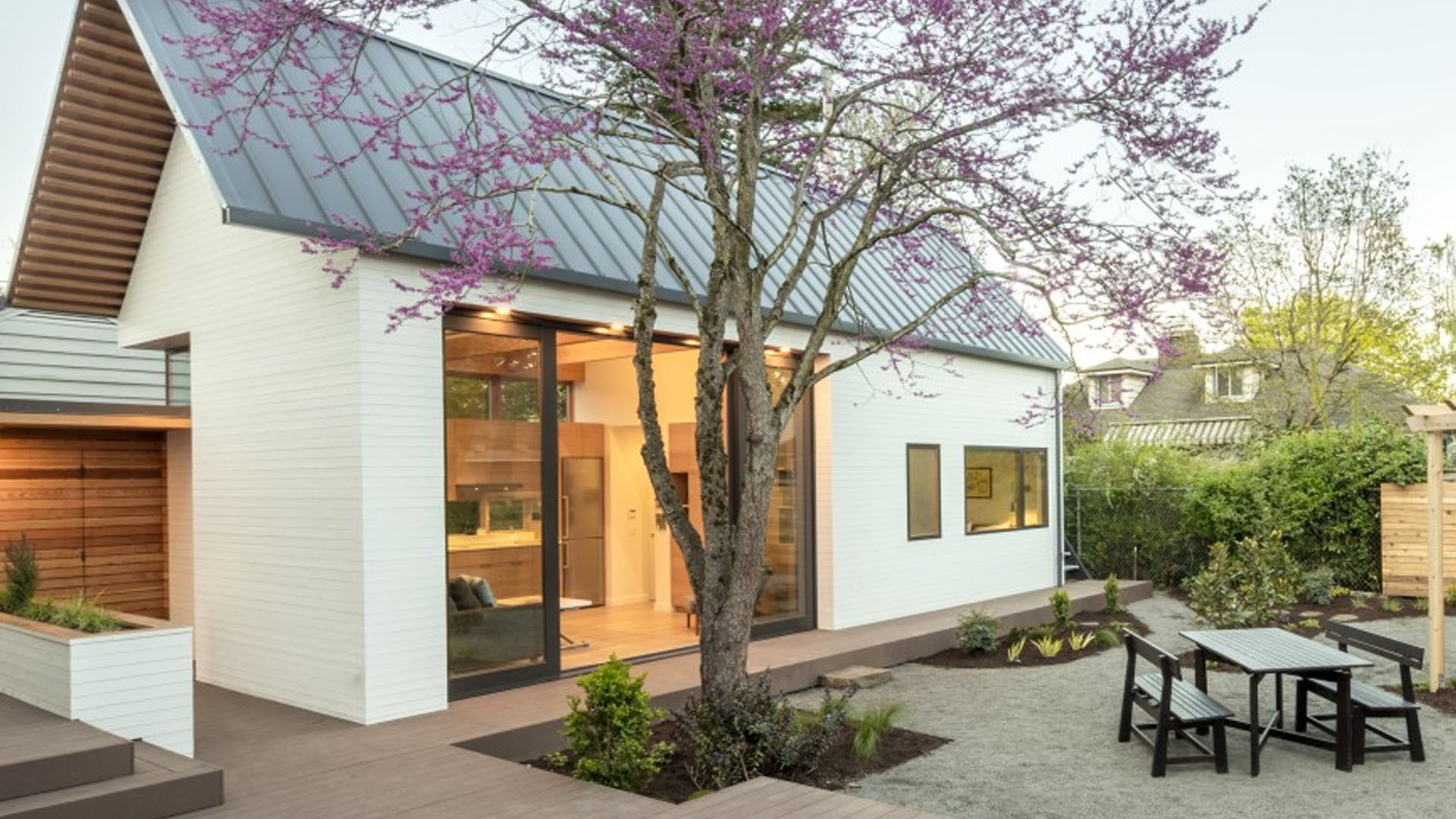 To create the ideal environment for her parents to age in place, a Portland, Ore., homeowner and her family approached local architect Webster Wilson with a retirement plan based around an accessory dwelling unit (ADU) in the backyard. According to this plan, the homeowner provided the land, and her parents financed the project and will move into the new unit when they are ready to retire, keeping the family close without overcrowding the main home.

At the core of this idea were three requirements. “The first big criteria was that it be accessible, and able to be a retirement home,” Wilson says. “Which meant that it had to be one story and had to have a wheelchair ramp. The second was that they did want something unique. They were showing me pictures of Scandinavian design, and they’d seen my work, and I’m known for more modern wood, and they wanted that as well. And then the third was, with any ADU there’s a lot of site restraints in these little backyard settings. So you really have to do your zoning research and get all your setbacks and figure out how big you can build with lot coverage and all the other zoning regulations.”

The city of Portland recently extended its reduction of permit fees for ADUs for the next two years in an effort to encourage greater housing density. Projects with two or more stories are required to match the architectural style of the lot’s main home, including its roof pitch and window proportions, and must undergo a design review before they are approved. “The city’s goal is to try and encourage a neighborhood cohesiveness, if they’re going to allow these ADUs,” Wilson says.

One-story units don’t require the same design reviews or restrictions, which allowed Wilson to design a modern, minimalist structure radically different from the more traditional main home. “I think that if you’re building something new, and especially detached from the main home, you have some flexibility to do something new,” says Wilson. “The approach was to do something modern, but also contextually sensitive. I think that was successful. It has a familiar gabled roof, but the detailing is clean and new.”

The unit is arranged in a 16-foot-by-32-foot rectangle against the setbacks in the corners of the lot’s backyard, with a small bedroom, full bathroom, and multipurpose living room spread across 600 square feet. The living room entryway is built into a 10-foot, floor-to-ceiling glass wall that opens onto the garden and faces the main home. The interior sets wood flooring and cabinetry against white walls and stainless steel appliances. Most of the living essentials are built into the cabinets, able to be concealed when not in use.

While the home was not built to be ADA compliant, all of its components are designed around accessibility and aging in place. The shower is curbless and wheelchair accessible, and none of the unit’s doorknobs, handles, or cabinet pulls require users to twist their hand to open them, due to concerns about arthritis. The entryway incorporates a series of connected storage sheds that mimic the look of cedar fencing, and connects to a pair of wheelchair ramps that lead to and from the driveway and the main home.

All of the wood used throughout the project was locally sourced and sustainably harvested in the Northwest. Douglas fir was used for the framing, soffits and trim, western red cedar for siding and fencing, and Oregon white oak for flooring and cabinetry. LED lighting, efficient appliances, and a high-efficiency ductless mini-split system augment the small unit’s inherent energy efficiency.

The project is the second ADU in Wilson’s portfolio, following a two-story backyard dwelling, also in Portland, in 2015. “On that previous ADU, I learned how to design efficiently and how to make rooms that are flexible and have multiple purposes,” Wilson says. “I think some of the design lessons I learned from the first one I was able to incorporate into the newer one. There’s definitely some learning that happens that you try to apply to the next project on the efficiency stage, trying to almost think like a boat designer.”